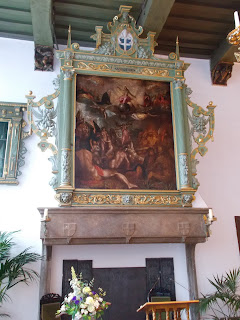 On Saturday we had this official 'welcome' to the town of Zwolle and we were invited to the Town Hall in the center of town. This used to be the place to get your new passport and driver's licence, where you had to record birth, marriages and deaths and lots of other things. 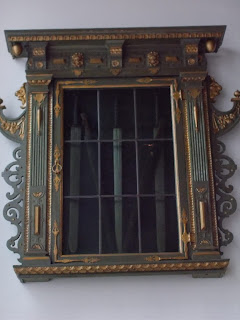 Things change however and the building wasn't big enough anymore. They now have a purpose-built town hall where they do most of that, but the old town hall is still standing and in use. 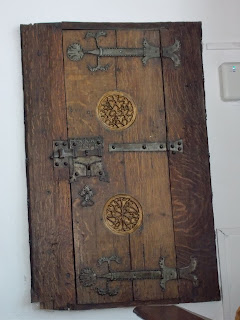 The main thing still happening in the old town hall is the ceremonial stuff. And the meetings of mayor and council people. The latter takes place in a nice modern extension to the building, but the former takes place in one of the old parts of the building. The original so to say. 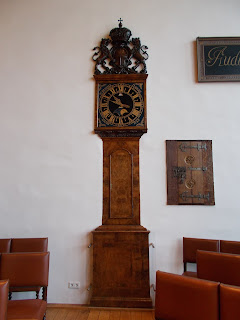 Today's photos are all that room. When I went in there, I recognised it, but I had to think long and hard before remembering I once attended a wedding ceremony there and who the people were. 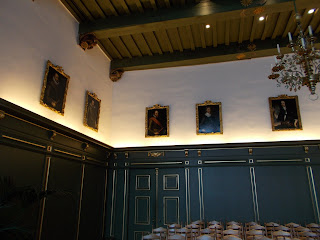 The top photo shows the area where the person who performs the ceremony stands. The swords in the cabinet hung right next to that area. The little cabinet below that (or the door in the wall) was not the only one: there were three more. I wonder what was behind them. I loved the clock very much. I just wonder whether that was a complete clock inside the wall or just the front. The last photo shows some of the art work on the wall. 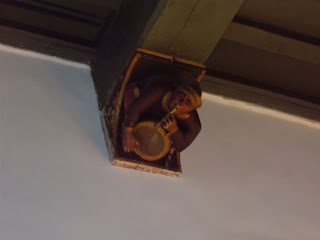 And then underneath the ceiling you can see little figurines which were quite difficult to get on my little point and shoot.

Tomorrow more about my first day at work.
Written by Mara at 08:30

Labels: Out and About