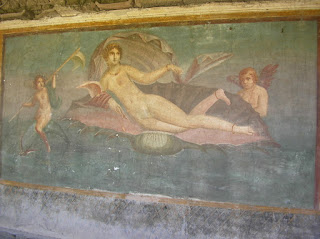 
Well, we call her Venus, but this image and any like this one are based on the original painting by Apelles, a Greek painter who painted Aphrodite's birth from the sea. That original was brought to Rome (and is lost now) and copies were made for private homes and places of worship. However, Rome had its own goddess of Love and so the name changed to Venus.

This particular painting is a mural in Pompei and has survived for close to two thousand years, making it one of the oldest (if not the oldest) known depiction. The most famous depiction is 'the Birth of Venus' by Botticelli.

According to himself, Julius Ceasar was a descendant of Venus and had a special shrine in his house dedicated to her.

For more V-words from around the world, please check out ABC Wednesday and join in the fun!