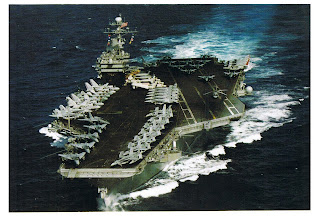 
No, I didn't take this photo: I wish! It's a postcard I received on visiting the ship though, so I thought it passed the mark.


The USS JFK was one of the biggest (if not the biggest) all purpose carriers in the world and I got the chance to see her and set foot on her, while she was still in commission (she has been out since 2007).


While me and three friends were on holiday in Malta in 1999, one of my friends hit it off with an American sailor who at the end of the evening gave us VIP tickets to go and visit this ship. Now, this was a sun-holiday for all of us, but then again, when do you ever get the chance to see the biggest navy ship in the world? So, we caught a bus and went to the capital of Malta where she was berthed. Long lines of schoolchildren were already waiting to get to see her, but we just walked past everyone and got on for a great tour.


The ship was absolutely huge! Over five thousand people working on her and some of those people wouldn't once get upstairs during the whole trip! Of course we didn't get to see everything. I never saw the sailors' quarters, the kitchens, the hospital, the shop, but we did get to the bridge and several other areas. It was a great day out and thanks to my flirty friend, a free one as well!


For more U words from around the world, please check out ABC Wednesday and join in the fun!
Written by Mara at 18:30