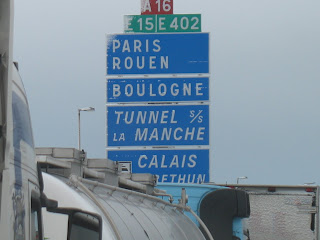 Nearly there, only three kilometers (two miles) to go...

Saturday, two in the morning: my alarm clock goes off and I have to get up to go to work. Just over an hour later I leave for the first pick-up. The temperature is well below zero and when I'm driving, the snow is coming down again. Fortunately I manage to keep ahead of the snow. The people at the second pick-up are late, so at the third pick-up the people are freezing, since they have been waiting for over twenty minutes by then!

The fourth pick-up is fine again and at the fifth pick-up (and my first big rest) nobody shows up. At the end of my rest they still aren't there and with permission from the company we leave. Belgium is fine. The streets are clear and clean and the traffic is light. The news however has some problems in store. Since five o'clock we've been hearing about the Channel Tunnel. Apparently four High Speed passenger trains got stuck in the tunnel below the Channel (ie the sea) for hours and hours with between 1300 and 2000 (numbers varied during the hours) passengers on board. Because of the difference between the outside and the inside temperature, the trains got technical problems. 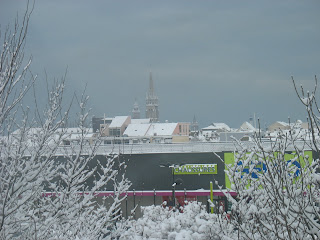 The view of snow-covered Calais which we enjoyed for nearly three hours...

Now, the company was notified by one of my colleagues at a quarter past five. They then called the train company who said the trains would keep running. So, we kept on driving. We got through Belgium and we hit France. The roads weren't as clean as in Belgium, but still managable. And then, about ten kilometers before the Tunnel, traffic slowed down. And it slowed down even more until it stopped completely. The only thing moving were the French cars who knew they had to get out of that traffic asap. I stuck it out, hoping against the odds that somehow we would make it. 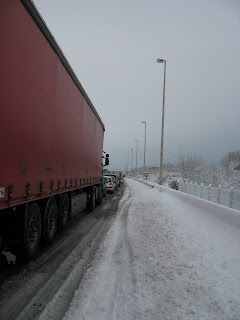 Lorries and cars as far as the eye could see

Then, a phonecall from a colleague. Traffic wasn't budging one inch at the terminal and the ferries weren't going either due to the port of Dover being closed. Besides that, the police in England were advising people not to come to England due to the awful wintery weather. My colleague said that the company would decide by two in the afternoon whether to return or not (this was at 12.30pm). Just before two I had moved another kilometer and got another phonecall: turn around, we're going home! It took some effort to get off the motorway, but in the end (thanks to a Portugese lorry driver) I managed to get off and turn around.


Now, remember I started driving at just past three in the morning. And according to European driving rules, this means my working day cannot be longer than twelve hours. By the time I had turned around two o'clock had been and gone, so I was nearly at my limit. However, I was a lucky bunny: I had a colleague on board. And he was willing to drive back. So, we switched places and he drove home. I finally got home at a quarter past nine and got into bed only fifteen minutes later.