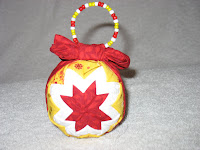 Somewhere in late October/early November (according to some too early), I entered an ornament swap. Basically, I had to buy/make a Christmas ornament and send it to someone somewhere. That person would send me Christmas ornament as well. Well, this week a box from the USofA arrived! 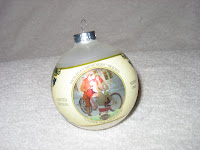 I managed to only look at the box for about half an hour, before I finally gave in and opened it. In the package was a box and in the box were two Christmas ornaments. A beautiful home-made ball in my favourite colours and a special edition Harley ball. The only thing I have to do now is get a tree so I can put them in. Thank you Michelle!
Written by Mara at 06:00