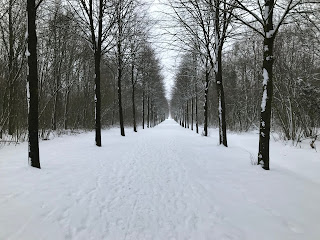 I cannot remember ever having a snowday. And now I have had two in a row. On the Sunday the weather was quite bad: fine snow but hard winds made for very tricky driving conditions. Not that I tried, as work was cancelled before I had gotten in the car.

I decided that instead I would go for a walk. It was heaving with people who all had had the same idea as me. It was good to be out though and I saw several small birds (robins, tits, sparrows) trying to find some food under the snow. I also saw a hare as it was being chased by a dog. Its owner was calling it back in vain (the dog, not the hare). From what I saw the hare was winning, but then they were out of sight. 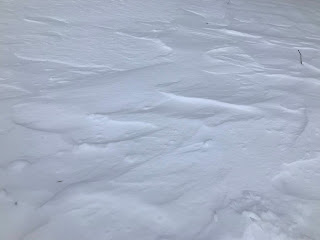 On Monday the wind had abated somewhat, but it was still snowing and the company I work for didn't think it a good idea to get out on the road in those conditions. Not for us drivers, not for the passengers. This time I had made it to work though and knew that the main roads were open, but there was still a lot of snow drift happening.

I went back via the storage facility where all my things are most of my things are and dug out my snow boots and several other good things to have in winter. Then I went home, changed out of my uniform and went for another walk.

This time there were not that many people. Most were working (from home) or in school and I had the place more or less to myself. No hare to be seen this time, but I did see some birds again. Every time I got close to take a photo though, they flew off!

On Tuesday I again made my way to work and this time I was actually asked to do something as well. However, after a short break there wasn't a bus for me to use on a route, so they sent me home with a bus that was nearing empty. 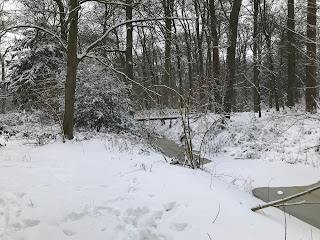 Today I was off and I did a short walk through the neighbourhood. Tomorrow I am back at work. Perhaps by then services will be back to normal. Most bigger roads are now clear and the bus routes usually get some extra attention.

I haven't built a snowman yet and I have seen very few anyway. The snow was so fine it doesn't really stick nicely. And even though it is below zero during the day, it is already starting to melt once the sun comes out. I did put out some sunflower seeds for the birds though, they just haven't seen them yet I think.

All photos and short video from my walk on Monday

Labels: Out and About, Winter