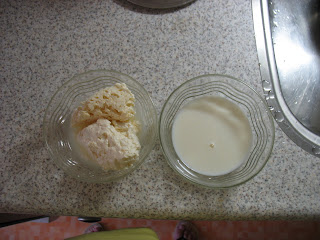 
When I put feed in the cat's bowl this morning, I saw some watery liquid on the floor next to the bowl. It's not unusual for one of the cats to throw up, so I got some paper towels and cleaned it up. And then I saw more liquid on the cupboard. When I opened the cupboard, I quickly discovered the culprit. No, it wasn't a cat. It was a carton of milk. It had a hole in it somewhere I guess, the milk had turned sour and during the night it had finally burst open properly and all the liquid drained out. It was everywhere!


I started cleaning up the mess, in the process spilling buckwheat everywhere as well. So, not the best way to start the morning!
Written by Mara at 11:02