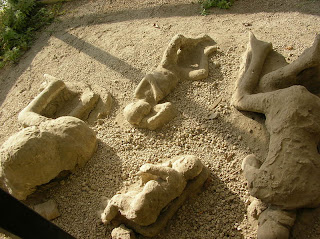 
When archeologists discovered the ancient site of Pompeï in the 19th century, they didn't really know what they had or how big it was. Over the years both became apparent while the archeologists uncovered more and more of the old Roman town. They did however stumble upon one slight mystery. Sometimes while digging, they found a void in the ground. One day, one of the men decided to pour liquid plaster in the void, wait for it to harden and then unearth it again.


What he found were outlines of people. Adults and children and on occasion even animals. Sometimes alone, sometimes in a small group, huddled together in fear of the great unknown. All died not knowing what had just happened, since nobody had ever seen a vulcano!


Over the years the process of plastering was abandoned as they found it did quite a lot of damage and wouldn't keep for eternity. New methods of preserving the unearthed are being looked into. However, the old method has done one thing: it gave Pompeï a human touch, it added feeling to a place of ruin, it gave the town a voice!


For more D-words, please check out ABC Wednesday and join in the fun!