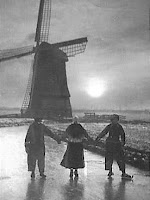 Whenever I think of winter in the Netherlands, I never think of snow. Because this country is so close to the sea and we have to depend on the east for our cold, the chances are quite slim. The cold will come, but the snow usually stays a bit more to the east. The last winter where we had enough snow during the whole summer, must have been in 1979. We've had snow since, but never as much as during that winter. Not counting of course the two foot of snow we had about five years ago and which stayed for a total of six days.


No, when I think of winter in the Netherlands I think of ice. Frozen ditches, lakes and canals. Of course the same rule applies as for the snow, but somehow we've always had more ice than snow. When I was younger I even used to skate on the ice whenever possible, but I'm not really a sportsperson and have given up since then. The last time I skated I lived in England and I skated on a rink. The last time I skated in the free must have been over 20 years ago. Of course the chances of skating are pretty slim. However, this year was the first time in 12 years there is enough ice for companies and schools to give pupils and staff "ice-free". There have been masses of people out on the lakes and canals and the sales of skates have soared! I'm still not one to go out skating (I don't even have any skates anymore), but it's a lovely Dutch sight.
Written by Mara at 14:54