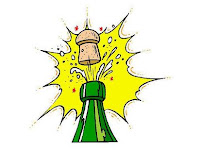 
I am no great fan of fireworks. Even when it is used to see out the old and see in the new (yeah right, as if...) I am not great fan. Now, it wouldn't be so bad if all they (mostly boys and men) had was nice coloured sparkly stuff, but noooooo, they have to have big, bigger and biggest bangs. And of course the ultimate bang as well using old milk churn and a lot of carbide and gunpowder (probably). They are only allowed to do this outside the towns, but I guess for a fifteen-year old a bit of grass in the middle of a built-up area is like outside the town, so BANG it goes!


Now, I'm not the only one hating the fireworks, my monsters also hate it. Apparently the hearing of cats is better than ours and every small sound is magnified incredibly. So, they hate fireworks as well. And when it goes quiet outside at half past eleven on New Year's Eve, they feel safe and come and sit down with me. Until midnight that is, because then everyone lights their fireworks at the same time, sending my cats to their hiding places.


All that is done now though: the fireworks are more or less over (an occasional small bang, that's it) and the new year has started.
Written by Mara at 18:48