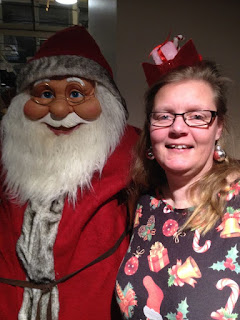 I enjoy a quiz. I really do. I watch University Challenge and sometimes I actually understand the question. Even more sometimes I can answer it! I have a knowledge of a lot of things. Useless knowledge mainly, but on occasion it works. When watching a quiz for example.

But I also like to participate in a quiz. In fact, in my younger years, while living in England, I was part of the pub quiz team. Every Sunday we would drive to another pub for our weekly fix. We weren't very good, but then again: we were mainly a group of young people who knew nothing about the world yet. And the fact that we ended in last place? Fine with us! During my second year I couldn't do it anymore: a different job meant I wasn't free on Sunday evenings anymore.

The last time was last Friday. A local radio station had organised the Big Christmas Quiz at a local hotel. I was part of one of the 67 teams that took part. My colleagues felt that my knowledge of all things Eurovision (don't know that much really) would help us secure a win. And if that failed: my knowledge of Christmas films.

It turned out I didn't know any of the answers. All the questions were on local people, sports, events and places. No Eurovision, no geography, no flags, no useless knowledge. And no Christmas, which I found to be quite strange since it was the Big Christmas Quiz!

Halfway through we were right in the middle with our 14 points. The top team at that point had 28. And then the strangest thing happened. Even though we only got 12 more points (according to us anyway), we won. We actually won! We got the cup and we got the prize (five-course dinner plus a sleep-over plus breakfast for two for each of us). 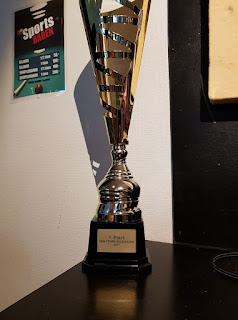 We still don't know how it happened and we may never know. But it was a nice way to start December!

Update: Late Sunday night (I wrote this post on Sunday afternoon) it was announced that there had been some problems with Excel, which resulted in the wrong team (ie us) winning. In other words: we did not win. Not even close to winning. I wonder whether we can keep the cup though?
Written by Mara at 08:00