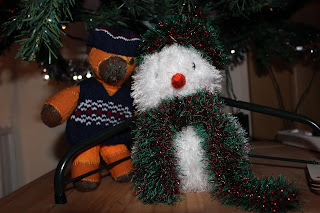 
Well, if you were thinking this would be one of those holidays were something new was done every single day... you were mistaken. Because those two just read and watch television and go shopping. The shopping part yesterday was due to the fact that Mara would have a near empty suitcase if she didn't get more stuff, because she has a carry-on suitcase that is full. If everything goes from the little to the big suitcase the big suitcase would be too heavy and otherwise it would be quite empty. What a reason to go shopping!!! 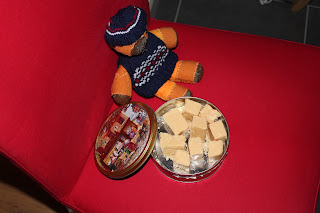 Oh, part of the shopping yesterday was to get the rest of the ingredients for the fudge they were going to make. And Mara says it tastes very good and will definitely be making it back home as well.

Apart from the shopping, Mara has also done some knitting. I would have thought she would have had enough of knitting for at least the rest of the month, but since she got here, she made a snowman (see top photo) for under her sister's tree. Which she also helped put up and decorate. 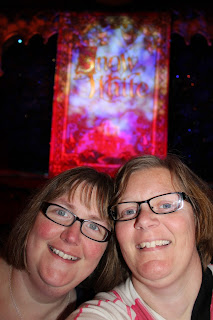 But Mara says the main reason she went on this short holiday is because she wanted to spend time with her sister. And doing nothing with her sister is better than doing lots of other stuff on her own. She says.

But, this is our last day here, tomorrow we will be heading home again. And this time we will take a bus to the airport, but a different airport from the one where we landed. I just hope she has all the good information, because I would like us to get home and see Miss Oswin again.
Written by Mara at 09:52