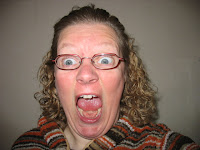 Do you know the saying: too many cooks spoil the broth? Well, I am the head chef of my broth and during the last week I had one passenger trying to add salt, pepper and a whole lot more and annoying me no end in the process.

As I mentioned in my last entry, I was off to Scotland for just over a week. On the coach was a nice group of people aged 60 and over and quite a few single women under 50. Even a few single men (whohay). We saw Glasgow with a guide in a lovely kilt (he wore socks and shoes underneath), we saw Loch Ness, but alas, the monster wasn't home or asleep or something. We went to see a lovely romantic little castle. Lots and lots of sheep. Men in kilts. We tasted whisky at Glenfiddich. Saw more sheep. I took a road definitely not designed to have a coach drive on it. We saw absolutely beautiful scenery, Edinburgh and more sheep.

And in the mean time the broth was being spoilt by a woman who got on my nerves. BIG TIME!! At first she seemed quite ok, but after only two days I had to adjust my opinion. She was just annoying and got more so as the week wore on. Fortunately some of the other guests were as annoyed by her as I was. I was so happy to finish a trip.

I've had bad trips before. Last year while on a trip to Italy I phoned my parents at two in the morning just to vent. This year nearly everything that could go wrong did go wrong on a trip to Ireland. But this trip? Grrrrrrr.....

I'm back home now though and the bottle of Glenfiddich (one shot in it) is empty and I hope I will never lay eyes on that woman again!