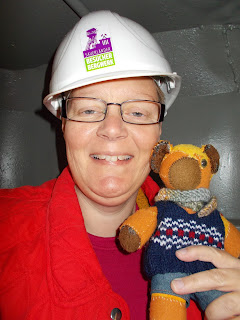 After our adventure in the morning, we made our way to Ramsbeck. In Ramsbeck there was a former lead and zinc mine that we were about to visit. But first we had lunch (or a very early dinner).

Then we had a little looksie in the museum itself, which was housed in the original mine buildings. The office from where they paid all the workers and the changing rooms. 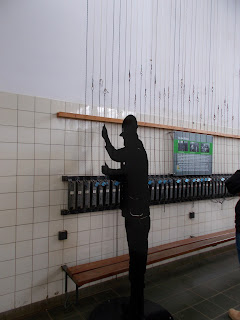 Perhaps you have seen those British films or documentaries where everybody has their own locker. Here they all had their own tube and rope. First you had to let the hooks down. Then you hung your clothes, boots, hat and other assorted on the hooks. 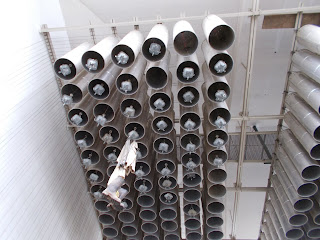 And lastly you used the rope to pull the lot up into your tube. As it was heated, your stuff would be nice and dry for your next shift. 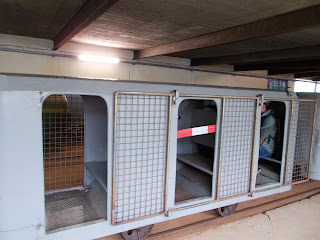 Once we had seen all that, we were given a hat (I didn't get one, my head was too small) and we were going on a train. Well, the hats might have been big, the train definitely wasn't. Mara nearly had to crouch to get in!
They locked us all in, started up the train and off we went: 1,5 km into the mountain! And when we had arrived, we were right smack bang beneath an amusement park. We would only have to dig through rocks for about 350 meters!
We were given a tour of the mine itself. We saw huge machines that made the place run. We were told how long it would take one person to mine 7 meters (1 year) and we saw (and heard) a machine that could do that in two days.
We also saw the bucket, which had to be emptied and cleaned by the poor man who had been late too often. I bet that taught him to be on time, as he had to do that to every single one on the floor. And after all that, we took the train back to the mining building to see daylight again.
Oh, and we learned two things that day: Mountain Work (Bergwerk) is what they call mines mostly, as most of the mines started off outside and gradually moved inside the mountains. And secondly Under Day (Untertag). Which is underground to you and me. You couldn't see daylight when underground so that's why they called it Under Day.
Written by Mara at 08:00