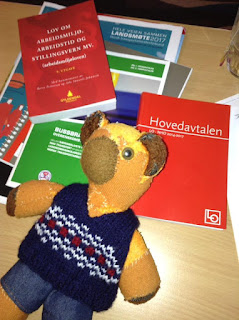 
Long time no see, but I was a wee bit on the tired side after my lovely holiday in the Bonny Land. I got spoiled rotten by Auntie Yam, but I did miss home. But now I am back and guess what: I went on a tour as well.


Last time it was Mouse who joined Mara on that weekend course, this time I got to come! First we took the bus to the hotel where we checked in. I was left in the room while Mara went down for the first evening's dinner and school work.

The next day though I was raring to go. We started with a good breakfast. There were sausages and egg and bacon and salmon. Mara says it was quite yum.

Then we went to the classroom where everybody (some alone, some in pairs) had to give a presentation. Mara and her partner did a presentation about the 'Battle of Menstad'. It happened in 1931 and basically was a conflict between employer and employees. It is very important in the history of the Union, because one effect it had was bring about a Basic Agreement that is still used (with alterations of course) today.

After the first half was done it was time for lunch. Which Mara said was really yum! I am only showing the dessert here, but it was certainly a goody!

Then, once lunch was over, it was back to the school room and more presentations. Mara said she learned a great deal during those presentations, which I gather is good, since it was school after all!!

Early in the evening we finished and it was time for a pre-dinner drink. A glass of tea she said. Well, Tatra-Tea. Made in the Tatra Mountains in the North of Slovakia. 52%, so I guess it wasn't exactly tea. It tasted good though (I had a sip, but it was quite strong).

Dinner itself was in a restaurant in town. I got to come along as well: I had to keep an eye on Mara after that tea!! Later that evening there was another quiz. Mara's team won again, but somebody said they had cheated and they had one point deducted. That way they were equal with the team that ended in second place and there had to be a face-off. Which Mara's team lost! But, it was a good night anyway.

Sunday started bright and early again. This time we got a little presentation from the teacher, which gave Mara even more information she didn't know about. They had some more work to do in groups and then it was nearly time for lunch and going home.

If school is like this, I don't mind going every week!!
Written by Mara at 08:00