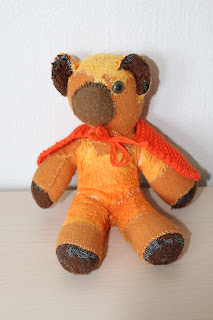 
Mara has been so busy lately, it is just incredible. Although last week she was done with the busy and started on the not feeling well (yet again). So, she stayed home for a few days, mainly concerning herself with knitting. And you know what she knits right? Yes, Mice for Mama!

Now, the title may be a bit misleading, because she doesn't actually knit the mice for her Mama (she has several already, stuffed in a bookcase). She knits the mice to sell and then half of the proceeds go to a charity that is dear to Mara's Mama's heart: the Stomach, Liver and Bowel Foundation in the Netherlands. And that reminds me: Mara's Mama was checked up a few weeks ago and they found:

NOTHING! Well, they found her stomach and her toes and her heart and her nose and all that, but they did not find any cancer. She had a really good doctor and a lot of POTP and POTL and POTF&F. So, she is now officially cleared, so yippee! 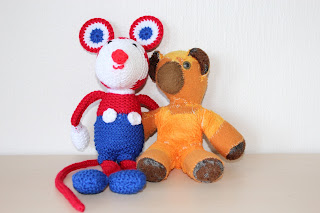 Anyway, Mara has been knitting mousies lately as well and they will go up on her other blog: Mice for Mama and when she started on the latest one, I knew it was going to be a good one. No, a great one! Because... it's in the colours of the Dutch flag! And before you say, well, Great Britain and Australia and the United States and a lot of other countries have the same colours, I know. But they don't have orange! So, I have decided to get myself a mouse. To join us on our travels! Which are going to be soon as well...

If you want your own mousey companion, why not click on the following link: Mice for Mama and see whether there is a mouse you would like to give a good home to.
Written by Mara at 08:00