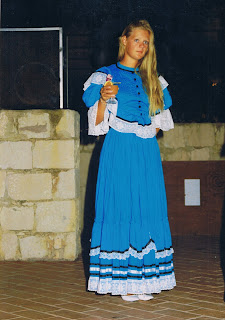 These photos were all taken during my first season at Club Med. You can see how tanned I am, although my nose never got any other colour than red for some reason. The top photo is taken during a 'living painting' I think. I can't remember drinking whatever it was I had in my hands. 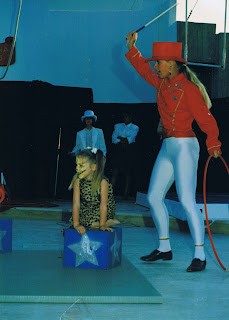 Being in the mini-club, meant I had to do shows with them as well. Mostly they were tried and tested, but this one was more or less thought up by yours truly: a tiger show with me as the tiger handler. And no, the stick was purely decoration!! 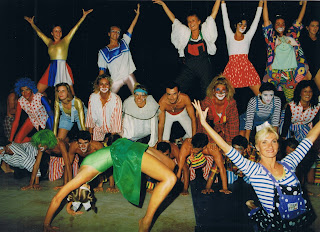 During the last few months of the season, several other shows starting popping up and the big circus show was one of them. I am in the photo, although not really recognisable. I am the one in green at the front. Please don't ask me to do that move now, I will need an ambulance! 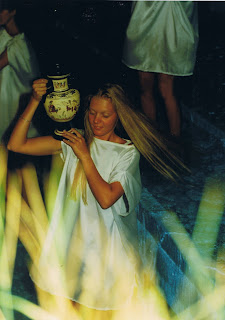 One of my favourite shows was the fire and water show. The butcher (who lived upstairs from me) had a fire-eating act and I was in several routines in the water. Not sure what the plot was, but it probably looked nice from the shore. 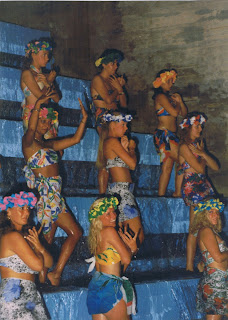 This photo was taken during the same show. I always tried to get the blue outfit (there were only two), so I had to come in early to bag it. I am slap bang in the middle here. 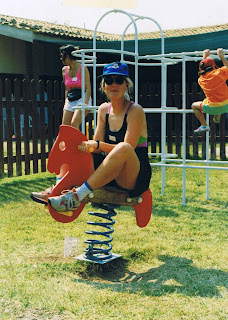 This photo was taken right at the beginning of the season. I know, because of what I am wearing. The further in the season, the skimpier the bikini really! And yes, that was my work outfit! Not too shabby. Mind you, if I were to wear it in my current job, I would probably be hospitalised with severe frostbite!
Written by Mara at 13:26