Brom at the Teddy Bear Festival 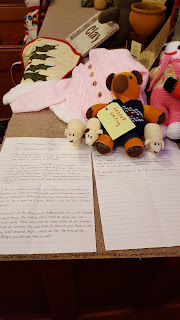 
As you know I am in Northern Ireland and today, the Teddy Bear Festival has started. We have been rushed off our paws this last week to get everything ready. In the end I am part of the craft class's display and I am writing letters! Most of the displays have a text from the bible to accompany them and I will put them here as well, so you can look it up and see how clever they are here in Portadown! There were several for 'my' display, but the one I liked best was from Exodus 35:30-35 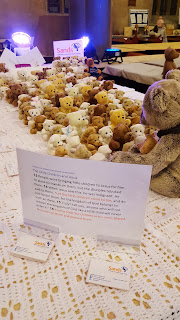 Apart from 'my' display, there are lots more! And Gera showed me some of them and even took photos of me in them! This photo was very special. The text from the bible is from Mark 10:13-16 and the people who made this display are from a charity called Sands: Stillbirth & Neonatal Death Charity. 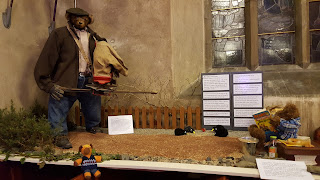 The next one was a very big bear, although they might have cheated a bit. The text comes from Matthew 13:1-21, the Parable of the Sower. 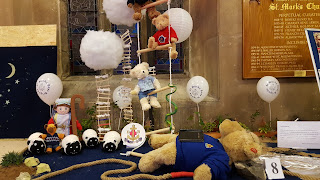 There was also a shepherd and he was herding some big sheep! But the story wasn't about the shepherd, it was about the bear sleeping. Can you guess who it is? I will give you a clue: Genesis 28:10-22. 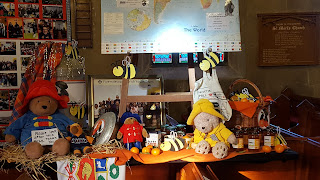 I don't know from which text this comes, but I think 'open your door to strangers and you will find a lifelong friend' must be in the bible somewhere. And if it isn't, it should be! 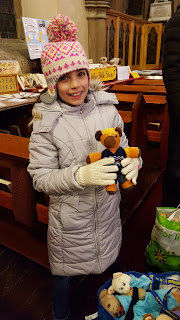 Gera will have to tell you who this little girl is, but she was nice and she has a beautiful smile. And I loooove her hat!

So, if you're in the Portadown, Northern Ireland area, make sure to come over to St Mark's Church and say hello to all of us! We would love to see you...
Written by Mara at 17:15