Miss Oswin gets a change of scenery 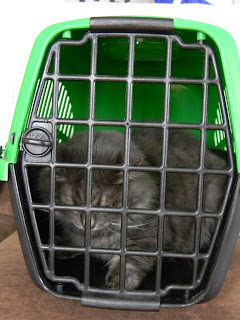 
Mara promised me that I would go outside today. I would get a change of scenery today. And I was all happy, you know. But there was a twist. A not very nice twist!

Because, yes, I was going outside, but in a CAGE!!! And yes, there was a change of scenery, but only because we were going to the VET!!! That is just not on!

Once at the vet, I behaved like a cat should behave. In fact, all the cats that were there behaved beautifully. The four-legged horrors though... They were whining, they were twitching, they wanted attention, they wanted treats, they were annoying. In fact the most best well-behaved four-legged horror was a tiny little black thing. All the others had to be told off again and again.

Anyway, I was fine. As I could have told Mara before she made that silly promise. And the vet was very nice as well, even though she did have me confused with a four-legged horror called Osvin! That is not a name at all, that is just an insult. The lady vet was very good with her petting and when she stuck the needle in (tricky one that vet), I didn't really flinch.

I hope Mara will forget about next year though.
Written by Mara at 16:56