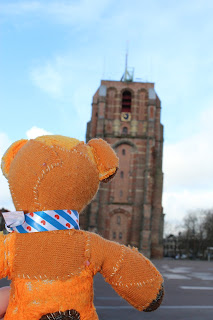 
Yesterday Mara and I took the car and drove for a long time. And then she showed me a tower and I thought it must be Pisa in Italy (I know things you know), but Mara said no, we weren't in Italy, we were still in the Netherlands. In fact we were in the town where she grew up and they too have a leaning tower!

But we weren't there to see the leaning tower (or Oldehove as it's called), we were there to do some serious investigating. Because we were going to the archives. There were so many books and papers and all sorts of other things. Mara had been clever and had made a short list of the things she wanted to see and one by one they appeared. 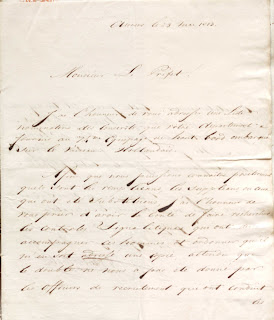 After all that searching I was getting a bit fed up. It's hard enough writing in English and Dutch, but when you have to read scribbles, part of them in French, it gets quite difficult in the end. Besides, Mara had promised a cow!

When we got outside however, it was raining, so instead of the cow, we went to some shops. And then we rang to a cousin of Mara's and we had a lovely evening with her family. It might not have been as relaxing, but it certainly was a great day!
Written by Mara at 11:39