I've been wanting to join a meme again for a long time now, but hadn't really found one I wanted to join until I read Flamblogger's blog. Coffee klatch sounded great, so I will try and join every week if possible, today for certain!

Today's question is to list ten things you have never done. So, here goes:
I've not managed to learn Japanese. Not for lack of trying though, I've still got the books at home, but jellybeans, is that language a tough one! Nothing is like any of the languages I speak and I had to give it up in the end.
I've never used drugs, not even a joint. Knowing my tendency to get hooked onto something reasonably fast, I think it was wise never to use any, although I do wonder what it would feel like to be all high. However, this DOES NOT mean I will be trying any!! I'll climb a tower to feel high...
I've never travelled the world. At some point in my life I really wanted to see the world and go backpacking, but as I've grown older I don't think I missed much. Besides I know I like my creature comforts a bit too much as well to be roughing it in some hostel in the outback of Australia! 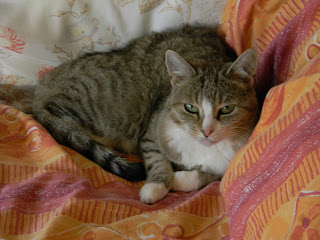 I've not had any children. I have got a nephew, two nieces, a goddaughter, a sugar daughter and a sugar son though. And of course my monsters who are almost like my children.
I've never ever played truant. I wouldn't have dared! The look my father or mother would have given me would have been too awful!
I've never cheated on any test. I remember once a class mate had actually gotten hold of the test and had copied it for the entire class. I was the only one who earned that grade fair and square because I refused to do it that way. My father and mother, you get the drift. 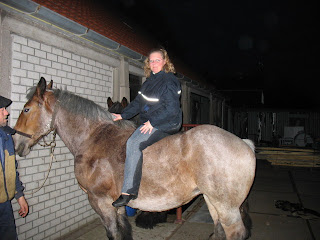 I've never seen 'The Day After' about the aftermath of the atomic bomb. I could have, I probably should have, but I refused and spent the periods when it was shown in religion class in the cafeteria of our high school. Me refusing anything was a sign that I was serious, since I usually went along with a lot.
I have never eaten mushrooms willingly. It's not so much the taste as the texture of them. Slimy, slippery, gross and they are grown on horses' poo! I will pick them out of my food. Ooh, even thinking about them makes my skin crawl!
I have never ridden a motor cycle or moped. When I was younger, the first thing I wanted to learn when I was old enough was how to ride a motor cycle. The only thing I have done so far is sit on the back and that was not the success I thought it might have been: a sore and wooden bum!
I haven't ever ridden a horse. I've been on one, but it has always been stationary. Oh, and I had to be hoisted on by two colleagues!!


Then there's a question to be answered as well: please share with us something that you do to prepare for this changing weather. Well, the thing I do is try and get my heating system to work again. It has a mind of its own after a summer of not being used and now it's quite temperamental, heating when it's not even on! But I will get it tamed before the really cold weather sets in. Or just wear thick socks!

For more Coffee Klatch, please go to The Tapestry of Life and join in!
Written by Mara at 13:15

Labels: Anything and Nothing, Mara