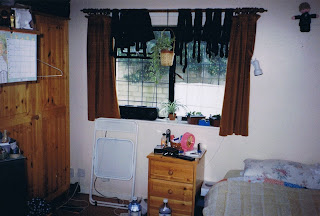 Well, with all those photos being scanned and cropped and named and things, I have so many photos now. And it would be a shame not to share them with you. Of course I can't show all of them: some are just showing me in a not so decent light, others have other people in it. But there are still plenty that I can show.


Now, I don't want to show you those photos every single day, that would become boring pretty quickly I think, so once a week I will show you a photo from my past with a little story attached.


The first photo of my new weekly thingy is quite a mundane photo. From 1992 until 1994 I lived in England. First in a room at the back of the kitchens of the hotel I worked in and later in a room in a house on top of the hill. The first was good because it had a private bathroom, the second was good because it had a kitchen and a washing machine in the house. This is a view of my second room.


It was on the ground floor of the house (called Serendipity) and was located between front door and garage. It was only a small room and L-shaped, but I liked it. So, let's go through what you can see: On the far right you can see a little doll hanging on the wall. I knitted it myself and represented the uniform worn by my male colleagues in the restaurant. I also had a little female doll. As window covering I occasionally used black tights. Not the most fashionable, but living with four men, they weren't too impressed if they would be drying all over the house. So, curtain rail it was.


My bedside table wasn't too big and completely covered. The alarm clock was a working one, although I do think my boss must have thought otherwise. At one point I was actually on time and all the gardeners thought they had come in for morning coffee early! But, I have also slept through four alarm clocks in one day! You can't see the other three, but they were scattered about the room to make me get up and get them to be quiet. It didn't always work though...


One other thing that is quite Dutch is plants. I always had them and you can see two in the photo. When I returned home in November 1994, I stuffed all of them in my car and drove them home. They survived for quite a few years after.


Apart from the white folding chair, all the furniture you can see was provided by the hotel. The bedding as well was provided, but I didn't really like it, so I bought my own duvet and covers and asked my parents to send me my blanket. It's hardly visible, but it peeps out from under the yellow bedcover.