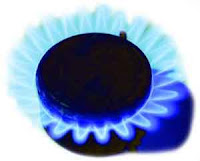 For some reason (which completely passes me by), every couple of years they change the watermeter. And because they never really worry about people having jobs as well, I had to ask for time off. Usually I can avoid it by telling my boss I need time off between such and such hour, but in this case I asked for a whole day.


Just past one the doorbell rang and there he was: the watermeterchanger! The minute he opened the door to the space that holds the watermeter he smelled gas. I had been telling myself for over a year now that it wasn't gas, it was just the air from below the house and the space between my house and the wall next door, but according to him it was gas. Meaning I had to get a man in to have a look at it! Fortunately it was my day off, because for gas leakages they tend to come out real quick...


About half an hour after the waterman left, the gasman arrived. But he couldn't smell anything and his little thingamajig couldn't detect anything either. The meter wasn't running, so he was at a bit of a loss. Until he opened the gas again (I had been told to close it). His thingamajig started bleeping and all colours were showing. He had found the leak!


Ten minutes later he was about to leave: the leak had been closed and no more gas was escaping. Two minutes after that he was back again: whether my heating was working? Well, the thermostat in my living room told me it was basically okay without the heating, but then it clicked: was the heater still on properly? So, I dashed upstairs, and checked. And behold: it wasn't! So I reset the thing, told the gasman and off he went again.