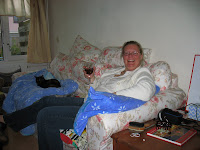 It's always quite hard for me to deal with people who have a louder voice than I do. I know I start talking loudly when excited or angry and other people do the same thing. But it's hard to stand up to people like that. When on the job it's quite ok, after all, I'm in charge and my word goes, but when not working, it gets a lot harder. I start nodding and agreeing, all the while thinking bad things about them.
I remember when I was about 19. It was my second season working abroad and I was a quiet, naïve person. I was in charge of a large group of children, but when the time came to make a show from scratch with those children, I was lost and couldn't do it. So when my boss started yelling at me in front of all my colleagues and all the children, something snapped. I started yelling back and for the first time in my life actually stood up for myself. It worked. After that, he never yelled at me again and he would never scold me in front of others again. He would come to see me and talk to me about any mistakes I might have made.
Since then I have learned even more. Some people can't handle 'lower' employees to talk back. Some people can't handle anything like criticism. And some people should be banned from working with other people.
Last night I had to get my coach back. It had been driven by a colleague I don't particularly like for the past two weeks and looked like a tip. He started shouting at me about the various problems, mistakes and shortcomings of the coach and I just told him to stop shouting, since I wasn't deaf. He looked at me and surprise surprise: he piped down. He then told me what was wrong and the whole thing became a lot more civil. After that he got his stuff and left for home.
But here sits quite a proud person, because I managed not to be overcome with dumbstruckness (I know it's not a word, but it should be) and actually stayed on top of the conversation!
Yippie!!
Written by Mara at 15:07